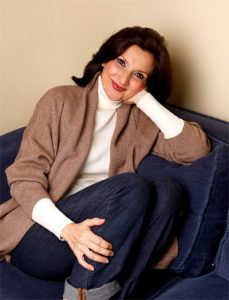 One of America’s foremost experts on Italian cuisine is an engaging public speaker, author and TV personality. A noted food historian and James Beard-nominated author of six books including Dolci: Italy’s Sweets and Pasta Modern.

She is the host on NYC’s popular weekly TV series “Americans who Love Italy” and appears on many other TV programs, including Today Show and Early Show. Francine has been featured on numerous specials for PBS, Food Network and History, Sundance and Discovery channels.

She lectures across the country, bringing her lively presentations to numerous Town Hall groups and has spoken at many prestigious venues including the Smithsonian Museum in DC, Florida Film Festival and Virginia Fine Arts Museum. Francine Segan’s World of Tastes is a wildly popular regular series at NYC’s premiere cultural center the 92Y.

She has been a food judge for the Fancy Food Show, Baccardi Cocktail competition and the International Pesto Competition. She was given the honor of presenting Mayor de Blasio with Italy’s 2014 prized white truffle. As spokesperson for Carrabba’s Italian Grill, a chain of 350 restaurants, she is featured in their La Pasta Vita video series.

Francine co-edited Entertaining from Ancient Rome to the Superbowl, a 2-volume encyclopedia, which was a finalist for the coveted Gourmand World Cookbook Award given each year in Paris. Ms. Segan writes for numerous online publications and magazines including Epicurious and Saveur. Francine Segan is a frequently consulted expert and has been quoted in numerous newspapers and magazines including the New York Times, Wall Street Journal, Vogue, Scientific American, USA Today, L.A. Times, and Chicago Tribune.